Please note changed date. Due to the July lockdown many events have had to be rescheduled.

The Turkish regime is attacking the Kurdish people on all fronts.

In Turkey, the Kurdish-based HDP (People’s Democratic Party) is under constant attack. Thousands of activists are in jail or before the courts. Elected officials are sacked and jailed and an outright ban looms.

In northern Syria, Turkey and its Islamist mercenaries have invaded and occupied the territories of the Autonomous Administration (‘Rojava’). It has carried out large-scale ethnic cleansing against the Kurds and established a brutal, lawless regime.

In Kurdish Iraq, for over a year Turkey has been waging a brutal war trying to establish a chain of bases there and deal a crippling blow to the PKK (Kurdistan Workers Party) in its guerilla strongholds.

Here in Australia our government stays silent. It falsely keeps the PKK on the terror list and continues to persecute desperate refugees, many of whom are Kurds who fled persecution in theocratic, anti-Kurd Iran.

The Kurdish people are divided between four countries and are denied justice and freedom in all of them. Turkey’s Erdogan regime is waging an all-out war on the Kurdish people, in Turkey itself and across the borders in Syria and northern Iraq. END_OF_DOCUMENT_TOKEN_TO_BE_REPLACED

[Turkey’s pro-Kurdish People’s Democratic Party (HDP) party has been under sustained attack by President Recep Tayyip Erdogan’s Justice and Development Party (AKP) regime. HDP local government and parliamentary elected representatives have been arrested and jailed, or stripped of their positions and replaced with pro-regime administrators. HDP members and sympathisers have been abducted and killed. Now, the regime is moving to ban the party outright. In response, HDP’s foreign affairs co-spokespersons Feleknas Uca and Hişyar Özsoy issued the following statement on March 18.] END_OF_DOCUMENT_TOKEN_TO_BE_REPLACED

As the Kurdistan Women’s Liberation Movement (KJK (Komalên Jinên Kurdistan) we send our greetings to the March 4 Justice women‘s uprising in Australia. Your chanting from the streets of Australia are heard by the women in Kurdistan and we are deeply inspired by the
masses of you that are opposing the ruling patriarchal system and searching for women‘s
freedom. END_OF_DOCUMENT_TOKEN_TO_BE_REPLACED 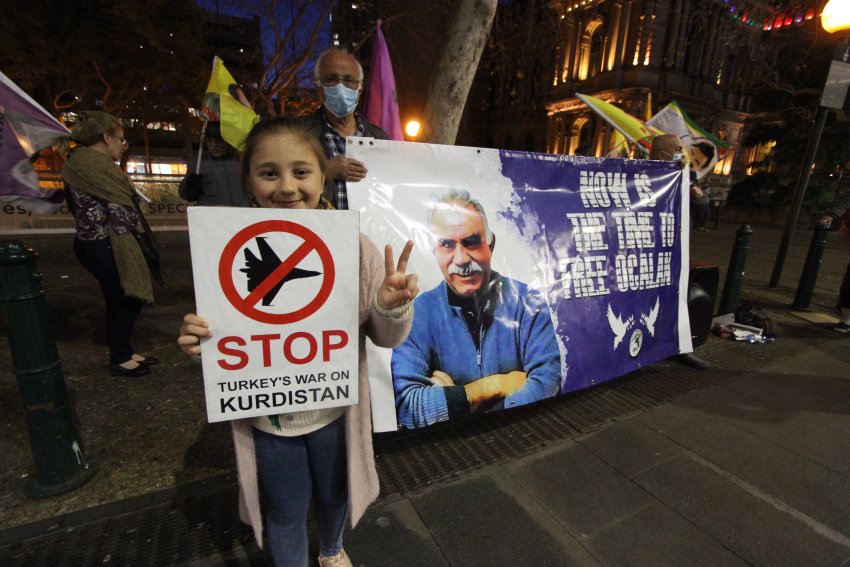 [By Peter Boyle] March 4, 2021 — Every year, since the 2013–2015 peace process between the Turkish state and the Kurdish liberation movement broke down, an international delegation of jurists, parliamentarians, artists and intellectuals has visited Turkey in an attempt to revive the process. END_OF_DOCUMENT_TOKEN_TO_BE_REPLACED

[By Peter Boyle] Socialist Alliance Moreland city councillor Sue Bolton initiated a solidarity motion in support of Kurdish mayors who have been undemocratically removed from office by the Erdoğan regime in Turkey. The motion was passed on February 10, with one vote against and two abstentions. Similar motions have been passed by the Inner West Council (IWC) in Sydney and Fremantle City Council in Western Australia. END_OF_DOCUMENT_TOKEN_TO_BE_REPLACED

It is unusual to undertake a rescue mission with dozens of bombs and more than 40 fighter jets. One might be forgiven for concluding that hostage rescue was not the ultimate aim of Turkey’s recent incursion into Kurdistan Workers’ Party (PKK)-controlled region of Garê mountains in Southern Kurdistan/Northern Iraq. END_OF_DOCUMENT_TOKEN_TO_BE_REPLACED

[ANF News Desk, January 22] On 15 October 2019, after Turkey began an offensive in North-East Syria, Australia’s Defence Minister Linda Reynolds was reported as saying: “I’m responsible for Defence exports, and in light of recent developments, I have asked Defence to consult right across government before any new or pending export permits to Turkey are considered. So I’ve asked for a pause. We are reviewing the situation to make sure that we do the right thing.” END_OF_DOCUMENT_TOKEN_TO_BE_REPLACED

[By John Tully] Imagine living in a country ruled by an autocrat who has jailed and detained tens of thousands of political opponents, including 200 elected officials and seven MPs from a legitimate political party, and disbanded 65 local councils and installed pliant puppets in their stead. All this has been made possible by trashing the rule of law, sacking tens of thousands of public servants, judges, magistrates, teachers, and academics, and replacing them with creatures of the ruling party. END_OF_DOCUMENT_TOKEN_TO_BE_REPLACED

Help us put an end to the systematic violence against women committed in the Turkish Republic!

Violence against women has risen by more than 1400% in Turkey, where one woman is killed by a male perpetrator every day.

Add your signature to our campaign to seek justice against violence!

No tolerance of femicide!